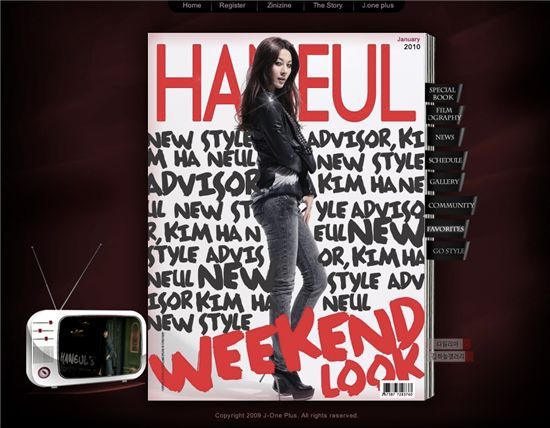 Hallyu star Kim Ha-neul has launched an online magazine on her official website (www.joneplus.co.kr/kimhaneul), according to a press release by agency J. One Plus Entertainment.

"We plan to provide new and refreshing information about Kim Ha-neul on a monthly basis thru the Kim Ha-neul Magazine", an official at J. One Plus was quoted as saying. He further explained that the magazine site, launched on Tuesday, will be a place for communication with the fans and electronic commerce with businesses affiliated with the actress.

The premiere issue of the "Kim Haneul Magazine", available in both Korean and English, contains various contents related to the actress -- including songs on her mobile phone, Kim's acting work and anecdotes, and fashion styling tips.

Kim bid her fans a happy new year through her magazine. "There is no way to express [gratitude] for the fans who have continued to love and support me, but I am always grateful. Let's start the year on a good vibe".

She also asked fans to look forward to her new television drama, MBC's "Road No. 1", saying "I will be going into shoot with a great director, fantastic actors and crew". Kim has been set to play the role of army surgeon Kim Soo-yeon who makes big sacrifices for her family in order to survive the war times in "Road No. 1", a war drama which celebrates the 60th anniversary of the Korean War.

The 31-year-old actress has enjoyed steady popularity in Korea since her debut in 1996. She has starred in numerous hit TV dramas and movies, including SBS TV series "On Air" last year and hit film "My Tutor Friend" in 2003 with fellow Hallyu star kwon Sang-woo.

Her most recent comedy action pic "My Girlfriend is an Agent", co-starring actor Kang Ji-hwan, placed her onto stardom throughout several countries in Asia including Vietnam, Singapore and Hong Kong.

"Kim Ha-neul launches online magazine on official website"
by HanCinema is licensed under a Creative Commons Attribution-Share Alike 3.0 Unported License.
Based on a work from this source