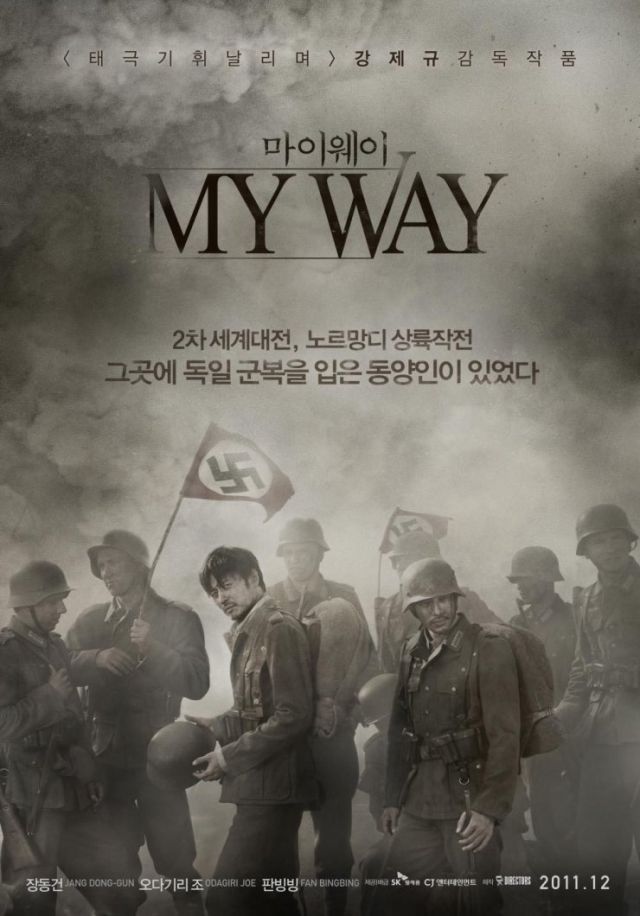 Kang Je-gyu's new pan-Asian movie "My Way" premieres on Dec. 22. Kang, who drew over 10 million spectators with the clunking history epic "Taegukgi" in 2004, is now hoping for Asia-wide success with the biggest budget and the most ambitious scale in many years.

The movie portrays the tragic destiny of two young men, one from Korea and the other from Japan, who are drafted into the Japanese Army during World War II and later have to fight in Soviet and German uniform. The movie is very loosely based on a true story.

The cast includes top stars from Korea, China and Japan, such as Jang Dong-gun, Joe Odagiri and Fan Bingbing.

In an interview with the Chosun Ilbo on Wednesday, Kang said, "When I started talking to Warner Brothers, the expected production costs were W40 billion. But Korean investors asked me to cut it down to W30 billion, and again to W28 billion. But that's still enormous in the Korean film industry".

Shim Hyung-rae's "D-War" cost about W30 billion, but the costs that the production company and distributor announced were inconsistent, which makes Kim Jee-woon's "The Good, the Bad, the Weird" officially the most expensive Korean movie so far with W18. The most expensive Hollywood film was "Pirates of the Caribbean: At World's End" with US$300 million.

Big investors CJ Entertainment and SK Planet invested 40 percent each in the film, and Kang Je-gyu's production company and a Chinese studio the rest.

◆ More War Than Ever

War movies in Korea have been limited to the Korean War or the Vietnam War. But, "My Way" depicts not only the Pacific War but also battles in Germany and the Soviet Union and the Battle of Normandy. A critic said, ""My Way" has a different meaning from prior war movies because it tells of World War II from a Korean and East Asian point of view".

"Despite being the high budget and star-studded cast, it has relatively weak plot and flat characters. If the film fails to draw enough audiences to meet expectations, it could have a negative impact on the Korean film industry", said another critic.

Since so much money was put into the movie, the battle scenes are more impressive than those of any Korean movie to date, and a lot more detailed than in his previous war film.

"My Way" targets the Korean, Japanese and Chinese film markets by casting stars from all three countries. More than half the dialogue is in Japanese, and the appearance of a Chinese partisan may be slightly irrelevant to the storyline but is evidently aimed at drawing in Chinese audiences.

The film will be released in Korea and Japan simultaneously on Dec. 22 and between the end of February and March next year in China. "The Japanese film market has always been big, and the Chinese market is expanding. As the East Asian market is growing rapidly, I thought it would be good to have a movie where all Asian viewers can share some emotions together", Kang said.

"Korean Mega War Movie Targets Pan-Asian Audience"
by HanCinema is licensed under a Creative Commons Attribution-Share Alike 3.0 Unported License.
Based on a work from this source