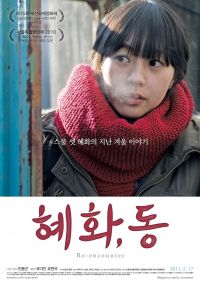 Previously known "Hye-hwa, Child" on HanCinema
Synopsis
To recover memories from five years ago
Can our story start again?
18 year-old Hye-hwa and Han-soo were lovers but as soon as Hye-hwa got pregnant Han-soo disappeared completely. Five years later, Han-soo suddenly appears in front of Hye-hwa and the two of them find out their baby is still alive. Hye-hwa doesnt believe Han-soo. However, after finding out her child had been adopted, she cant help but weaken.
____________

Re-encounter drew favorable reviews from critics and audiences alike when it was screened at film festivals last year.

Director Min Yong-geun, who also wrote the script, took a risk in deciding not to rely upon top stars to tell his story.

The actors talents shine through and their performances were well-received by film critics.

The movie hits theaters on Feb. 17. The Korean title of the film, Hye-hwa, Dong, is not related to the Hyehwa-dong neighborhood in central Seoul.

View all 48 pictures for "Re-encounter"