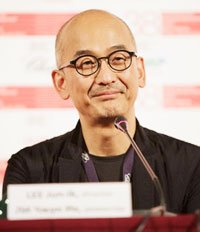 The festival, which runs from June 23 to 30, is one of the most prestigious film festivals, along with the ones in Berlin, Cannes and Venice.

Some 300 movie fans including filmmakers gathered to watch one of his latest films, "The Throne" on the opening day of the respective last week.

"I am honored that my films were invited to the festival that boasts 80 years of history", director Lee Joon-ik said.

The retrospective features five of Lee's films -- "DongJu, The Portrait of A Poet", "The Happy Life", "Hope", "The King and the Clown" and "The Throne".

Lee is the second Korean director to hold a retrospective at the festival after Im Kwon-taek in 2008.

Other Korean films such as "Mrs. B. A North Korean Woman" by Jero Yun, "Sorry Day" by Bae Ki-won and "Worst Woman" directed by Kim Jong-kwan have been invited to the official competition section of the festival.

"Moscow Film Fest Holds Retrospective Dedicated to Lee Joon-ik"
by HanCinema is licensed under a Creative Commons Attribution-Share Alike 3.0 Unported License.
Based on a work from this source