Romance lost between spooks and laughs 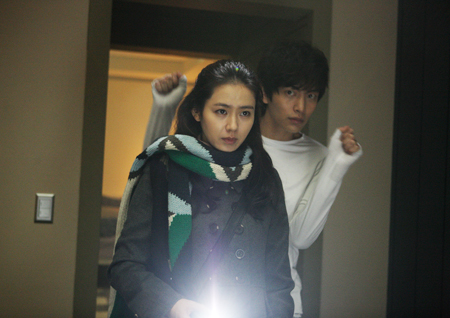 Son Ye-jin, front, and Lee Min-ki appear in a scene from the horror romantic comedy "Spellbound". / Courtesy of CJ Entertainment

It starts out promising: a young man falls for a beautiful woman, who turns out to not only be able to see ghosts but causes them to haunt those around her. Creepy lost souls keep interrupting the consummation of what should have been a heart fluttering rather than heart attack-inducing first kiss.

"Spellbound" inventively introduces elements of horror to the typical romantic comedy, presenting frightful apparitions as hurdles the couple must overcome. The spooks and even the somewhat crude jokes work with the effortless charisma of the cast members but at the cost of the actual development of the romance, which loses momentum midway through the film.

The star power of leading lady Son Ye-jin and new kid on the block Lee Min-ki, as well as the appeal of the trailer, makes it a mildly entertaining date movie with some potential resonating effects for pan-Asian audiences, but not enough to enter the ranks among some of the more memorable genre offerings of late such as "Cyrano Agency".

Son, who seems to have done almost everything onscreen from playing the flirtatious femme fatale to tragic drama queen, experiments anew as Yeo-ri, resigned to a life of pitiful solitude. Even her family has moved abroad to be away from her haunting effects, leaving her to attend to uninvited spirits while camping out in a tent in the living room. Dating is naturally off limits and her only social life entails occasionally calling her best friend, whom she hasn't seen in the 10 years since acquiring her special skills.

Lee, who is enjoying newly amassed star power following "Haeundae", plays Jo-gu, a free-spirited magician. While pulling off some tricks on the street, he notices Son's haunted aura and is inspired to launch a horror magic show. Their business partnership proves to be a huge hit, but Jo-gu can't stop wondering why Yeo-ri insists on being so antisocial.

Jo-gu soon learns about her abilities, and takes pity on her barren love life. While trying to set up dates for Yeo-ri, he ends up falling for her (no surprise there). But as he begins to experience one freak accident after another, he must decide whether he can fully accept the conditions of loving the woman ― life insurance and becoming used to interacting with the dead.

Son brings a few compelling monologues and inebriated ramblings that provide insight to the psychology of a woman who's long been ostracized. Yet when the film attempts to dabble in soul-searching ventures such as helping hit-and-run victims using her power or trying to console a dead classmate, they stop short of being cliches. Lee on the other hand is quite charming in his candidly awkward character, which seems to have become his signature persona.

The problem lies in the fact that the two leads never quite make the chemistry sparkle, in spite of the juicy dating advice by Yeo-ri's goofy girlfriends (Kim Hyun-sook in particular plays another memorable supporting role after "Cyrano Agency" and "200 Pounds Beauty").

The film brings to mind "To Catch a Virgin Ghost", which is not surprising since it was penned by director Hwang In-ho. In his directorial debut "Spellbound", Hwang manages to craft an atmospheric tone but the lack of a well-developed central plotline results in a narrative that is dragged out by bits of episodic humor and fright.

The film does, however, point to positive developments in Korean cinema, for mid-budget films to experiment with more genre mash-ups.

"Romance lost between spooks and laughs"
by HanCinema is licensed under a Creative Commons Attribution-Share Alike 3.0 Unported License.
Based on a work from this source