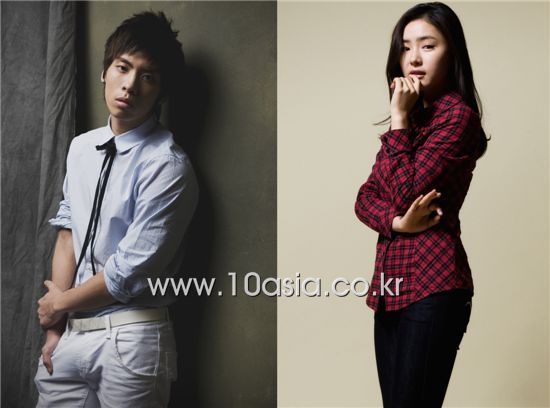 Local sports daily Sports Seoul on Wednesday carried a report revealing photographs of the two on a date on October 20 along with confirmations by their agencies that they have romantically involved for about a month now.

In the photos, the couple, strolling at a park near Sin's house in the southern Samsungdong district of Seoul, were seen smiling and talking while Jonghyun had his arm around the actress or holding hands.

The paper also quoted sources close to the couple as saying that the two mostly talk over the phone or text message each other since they are often too busy to meet.

Another source said, "They became close quickly because they have similar thoughts and interests. They also both became stars at a young age which I'm sure has also been difficult for them in certain ways so I think they can talk to each other in this sense as well".

The report explained that the two first met at a concert in May for which Sin was one of the emcees and SHINee performed. They met again by chance at a get-together of a mutual acquaintance.

"I think it's been about a month since they've opened their hearts to each other. I think they're in the process of getting to know each other with fond feelings", an official at Sin's agency Namoo Actors was quoted as saying.

Jonghyun's agency SM Entertainment admitted to the relationship as well, explaining, "I think they've just started [dating each other]. I had heard they had met several times through an acquaintance".

Sin, 20, had garnered much attention when she first debuted at the young age of eight as the model of the poster for hit singer Seo Taiji's "Take 5" album.

After spending a few years off the screen, she then returned with a role in movie "My Little Bride" starring Moon Geung-yeong and Kim Rae-won in 2004, and played several more acting roles, but shot to stardom last year through MBC smash hit sitcom "High Kick Through The Roof".

Jonghyun, also 20, debuted as the lead vocalist of his five-member band in 2008. SHINee is one of the most popular groups not only in Korea but throughout Asia.

They recently enjoyed a successful return to the music scene with their second repackaged album "Hello" and are readying for their first concert to be held in December in both Korea and Japan.

"SHINee Jonghyun and Shin Se-kyung spotted dating"
by HanCinema is licensed under a Creative Commons Attribution-Share Alike 3.0 Unported License.
Based on a work from this source