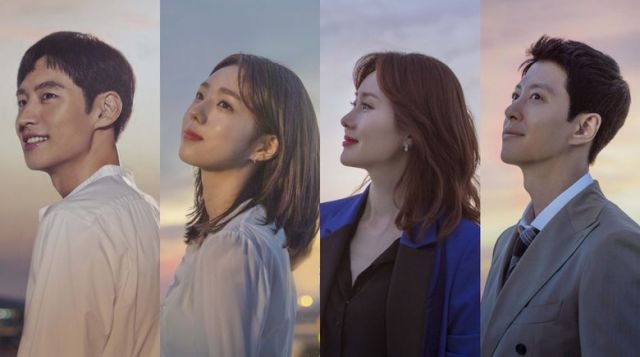 "Where Stars Land" – Available October 1 – 2018 South Korean Viki Original series directed by Shin Woo Cheol.
Is it possible to do well in a job when you know it's not exactly the job you had in mind? Lee Soo-yeon (이수연) (Lee Je-hoon) dreamed of becoming a pilot, but his poor vision squashed that dream. He goes to work at Incheon International Airport in the general planning department but harbors a secret that makes him keep his distance from his coworkers. Han Yeo-reum (Chae Soo-bin) is a bubbly new passenger service agent at the airport who is eager to do her best. But her clumsy nature makes her a threat to herself and the passengers. Can Soo-yeon clean up the messes that Yeo-reum creates on the job?
Show page: https://www.viki.com/tv/36298c-where-stars-land

"Bad Papa" – Available October 1
Yoo Ji-cheol (Jang Hyuk) is a former undefeated boxing champion who falls into despair after losing all of his fame, money, and family at once. As he begins to stand on his feet again as a mixed martial arts fighter with the help of a mysterious drug, he sets out to find the family that he lost.
Show page: https://www.viki.com/tv/36233c-bad-papa

"Hundred Million Stars from the Sky" – Available October 3
An older brother will do anything to protect his younger sister. Yoo Jin-gook (Park Sung-woong) is a veteran homicide detective who is getting weary of his job. The only light in his life is his younger sister, Yoo Jin-kang (Jung So-min). He dotes on her and is protective of her like a father figure ever since they lost their parents. When Jin-gook starts investigating a suicide of a university student, he can't help but feel that the dead student's boyfriend, Kim Moo-yeong (Seo In-guk), may have been responsible for her death. Moo-yeong seems like a nice guy who works at a Korean beer microbrewery, but there seems to be a dark side to him. When Moo-yeong meets Jin-kang and the two begin to develop a relationship, Jin-gook is determined to stop it. But can Jin-gook protect Jin-kang when she needs it the most?
Show page: https://www.viki.com/tv/36185c-the-smile-has-left-your-eyes

"Twelve Nights" – Available October 5
If you meet the same person over and over again over the course of many years, is it just coincidence or fate? Han Yoo-kyeong (Han Seung-yeon) takes a trip to Korea after graduating from college in the United States and ends up fighting with her boyfriend and breaking up. She meets Cha Hyeon-oh (Shin Hyun-soo), who took an impulsive trip to Korea after quitting his job in Japan. The two share a walk on the beach and then part ways. But Yoo-kyeong and and Hyeon-oh surprisingly keep bumping into each other over the course of three different trips and end up spending 12 nights together. Could this be just coincidence or something much more? "Twelve Nights" is a 2018 South Korean drama series directed by Jung Heon Soo.
Show page: https://www.viki.com/tv/36183c-twelve-nights

"Room No.9" – Available October 6
Strange things happen inside Room No. 9 of the high-security women's prison. Eul-Ji Hae-i (Kim Hee-sun) is a ruthless lawyer who wins all of her cases. She goes to meet with Jang Hwa-sa (Kim Hae-sook), who is on death row for an infamous case of poisoning serial murders. Inside Room No. 9 of the high-security women's prison, the souls of Hae-i and Hwa-sa change bodies. Does psychiatrist Gi Yoo-jin (Kim Young-kwang), who is Hae-i's boyfriend, somehow hold the key to the women returning to their own bodies? "Room No. 9" is a 2018 South Korean drama series directed by Ji Young Soo.
Show page: https://www.viki.com/tv/36229c-room-no-9

"Ms. Ma, Nemesis" – Available October 6
A mom (Kim Yunjin) who is falsely accused of murdering her own daughter tries desperately to reveal the mysteries surrounding her case in order to reveal the truth and her innocence.
Show page: https://www.viki.com/tv/36235c-ms-ma-nemesis

"My Healing Love" – Available October 14
Is it possible to be a modern-day superwoman and just have it all? A great career, the love of your family, a perfect husband, and adorable kids? So Yoo-jin returns to TV as an ambitious woman in search of her own identity and independence, whether that's being a mom or saying no to marriage and kids altogether!
Show page: https://www.viki.com/tv/36232c-my-healing-love