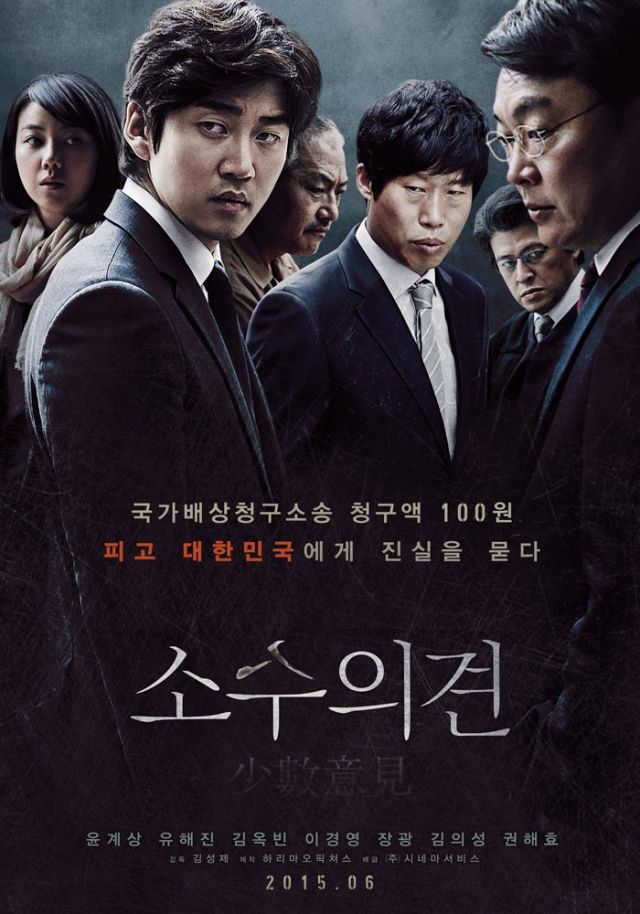 The poster for movie "Minority Opinion" was revealed.

The poster reveals a great ensemble of the cast of the movie.

It features Yoon Kye-sang, Yoo Hae-jin, Kim Ok-vin, Lee Kyung-young and Kim Eui-sung. They are all looking at different directions which show they have strong opinions.

Based on an original by Son Aram, "Minority Opinion" is a legal drama about a team of investigators and lawyers who struggle to find out the truth about the death of two young people.

Yoon Kye-sang plays Jin-won, a lawyer and Yoo Hae-jin, a divorce lawyer who hasn't even been close to a criminal court.

Kim Eui-sung is Jae-deok, an ace investigator, Lee Kyung-young, the father of one of the dead youngsters and Kim Ok-vin, Soo-kyeong, a reporter who digs through the case. Kwon Hae-hyo is the judge.

The movie is directed by Kim Seong-je.

"Yoon Kye-sang and Yoo Hae-jin's "Minority Opinion" poster"
by HanCinema is licensed under a Creative Commons Attribution-Share Alike 3.0 Unported License.
Based on a work from this source