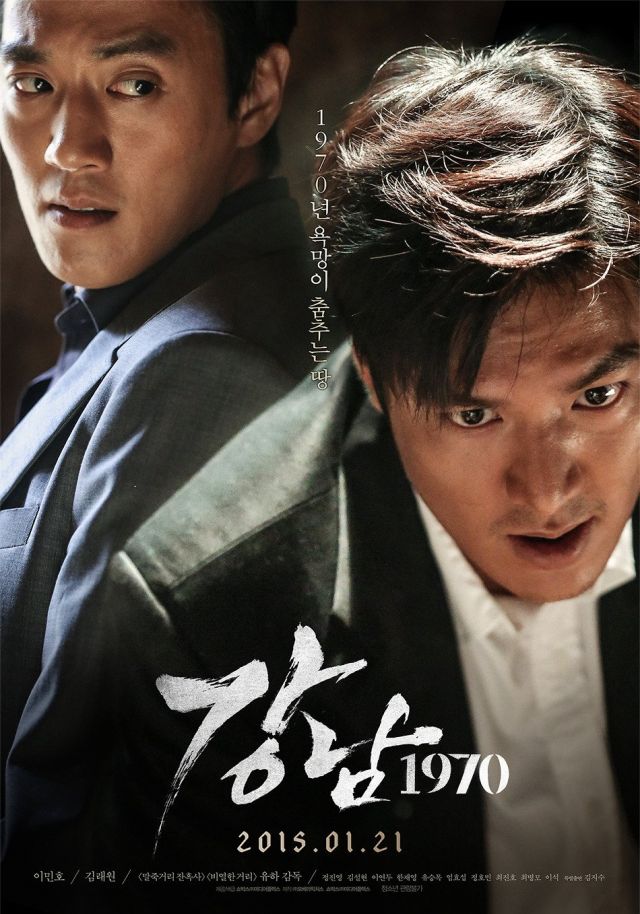 Yoo Ha's action noir "Gangnam Blues" (aka "Gangnam 1970") was the number one player at box office over the weekend, pocketing over $5.5M (27%) and coming out on top in what was the most closely-contested tussle at the top we've seen thus far.

The 709K filmgoers Yoo persuade into his caves (830) was narrowly enough to spoil Disney's big animated entrance into the game. "Big Hero 6" was, like Yoo's "Gangnam Blues", released in Korea last Wednesday, and competed over 822 screens to claimed 662K stubs ($5M - 25%). It was an awesome photo finish that ultimately favoured homemade Han over foreign fantasy, but only just.

Last week's winner, JK Youn's "Ode to My Father", was finally removed from power having enjoyed five straight weeks as the nation's flagship feature. Week six for Yoon's touching success saw it step down to third in light of a new generation, but it was less 'stepping down', and more like a stub scrap given Yoon's blockbuster still managed pulled in over 512K (18.4%) and remain competitive.

"Ode to My Father" has now breached 12M admissions (only the seventh to do so), and having just overtaken "Taegukgi" (11.7M) in the list of all-time hits, it's now cheekily eyeing the "The King and the Clown" (12.3M) for sixth. It's all very high-stakes, but this sleeper hit has really resonated with the Korean public, and has capitalised well on the year's slow start and relatively slow competition.

Park Jin-pyo's romantic comedy "Love Forecast" (starring Lee Seung-gi and Moon Chae-won) opened in second last weekend with just under 680K, but struggle to maintain that early momentum as it fell to fourth here with just 281K (10%). Another victim of the cinematic cycle was Stiller's "Night at the Museum: Secret of the Tomb" (177K - 6%), it too took a tumble as it creeps unconvincingly to a million (currently 902K).

In sixth came Ha Jung-woo's drama, "Chronicle of a Blood Merchant" (featuring Ha Jung-woo, Ha Ji-won, Jeon Hye-jin-II, Jang Gwang, Joo Jin-mo-I, Sung Dong-il and others). It claimed an additional 115K (4%) over the weekend across 391 screens; perhaps a disappointing performances as that million-admissions milestone seems to move ever so slightly away (855K).

From seventh to tenth various foreign flicks fought it out. The critically acclaimed "John Wick" (starring Keanu Reeves) and the British sci-fi debut "Ex Machina", both entered into the fray and fell into seventh (59K - 2.2%) and ninth respectively (37.4M - 1.4%). Meanwhile, the controversial "American Sniper" secured eighth place with nearly 39K (1.4%), bringing its total tally in Korea now to $301K (257K), and, lastly, the weekend was quietly closed out by the Japanese animation: "Pokémon the Movie: Diancie and the Cocoon of Destruction" (26K - 0.85).