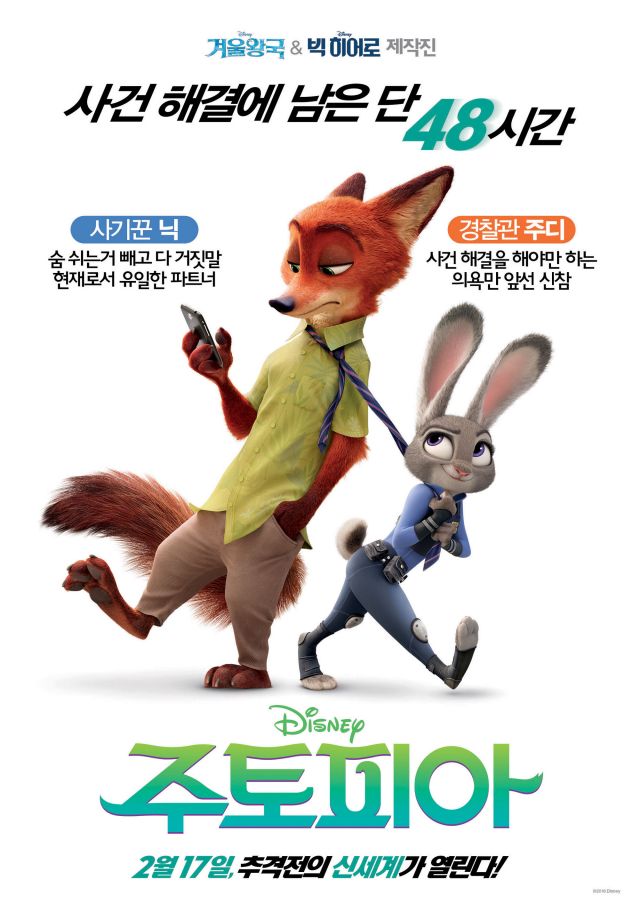 Disney's "Zootopia" claws its way to the top...

Walt Disney's "Zootopia" arrived in Korea mid-February and for the first three weeks it has steadily occupied third place. Films like "A Violent Prosector", "Deadpool", and "Spirits' Homecoming" have managed to outperform Disney's latest, the company's 55th animated feature, but the film found new impetus in the wake of its American release (March 4) and has now climbed to the top of Korea's box office during its fourth week out.

"Zootopia" garnered 296 thousand admissions last weekend from 641 screens for third place, but its fourth week out in Korea saw the film collected 342.9 thousand admissions (20.7%) from 636 screens to move its total tally now to 2.3 million, or $15.1 million. Worldwide, "Zootopia" has received critical acclaimed and has, to date, banked nearly $500 million.

Last weekend it was the local film "Spirits' Homecoming" by Cho Jung-rae, starring Kang Ha-na and Choi Ri, that took the top spot ahead of International Women's Day, and its third weekend out yielded an additional 286.7 thousand admissions (16.6%) to move its total tally now to 3.1 million ($20.1 million). Not far behind Cho's heartfelt and timely drama came a new foreign flick: "London Had Fallen" by Babak Najafi, the sequel to the 2013 action film "Olympus Had Fallen" that made $161 million. "London Had Fallen" was allocated 523 screens around the country and from them managed to grab 16.7% (273 thousand admissions) of the total weekend sales for a podium finished in week one.

The second weekend of March was, relatively speaking, subdued compared to previous weeks this year and there wasn't much in it between the top four films. Mo Hong-jin's "Missing You - 2016", for example, which was released last Thursday, claimed 257 thousand admissions (16%), making the difference between second and fourth place less the 30 thousand. "Missing You - 2016" is a thriller about a young girl whose father was murdered by a serial killer who's about to be released from jail. The film stars Shim Eun-kyung, Yoon Je-moon and Kim Sung-oh.

In fifth place, and marking somewhat of a watershed in terms of admissions, came Alex Proyas's "Gods of Egypt". Last weekend the film sat in second place with 23% of the sales going its way; week two, however, was less fruitful. Alex's epic dropped three places having only managed to add 159 thousand (9.7%) to its cause, and since its release on the third, the film has banked over $5.5 million (788 thousand admissions). With less that half of that sum in sixth entered the American biographical comedy drama "Joy" by David O. Russell. "Joy" was released in America on Christmas Day and scored Jennifer Lawrence a Best Actress nomination at this year's Oscars.

Marvel's deviant "Deadpool" slipped from fourth to seventh after claiming 60 thousand (3.8%) and was closely tailed by Lee Joon-ik's latest drama: "DongJu, The Portrait of A Poet" starring Kang Ha-neul and Park Jung-min. "Dongju" was released in Korea a few days after Valentine's Day, and with the 59 thousand admissions it claimed here, the film has reached a million admissions ($6.6 million).

The Hong Kong biopic "Ip Man 3" by Wilson Yip entered the charts in ninth place with just under 20 thousand admissions (1.2%). This is the third film that chronicles the life of the legendary martial arts master responsible for training the iconic Bruce Lee. The Oscar-winning biographical drama Spotlight by Tom McCarthy rounded out the second weekend of March by claiming tenth place (down two places) with 19.6 thousand; this brings its bottom line in Korea now to $1.8 million, or 269 thousand admissions.