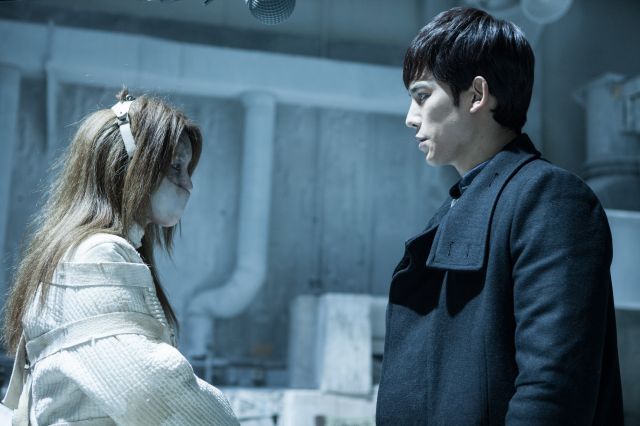 The first portion of "MAD SAD BAD" is a story about high school in the modern age. Seung-ho (played by Lee David) is a fairly lonely and pathetic teenage boy. He socializes mainly through a chatting cell phone function. The monotony of his life is given a sudden shock by a text message from Woo-bi (played by Son Soo-hyun), who claims that she's suffering from abuse and singles Seung-ho out of the chatting group for aid.

This segment plays like a mystery, except there's not really any invesigation. Everyone just takes Woo-bi's claims at face value, eventually leading up to a final confrontation. The overall moral of the piece appears to be that nerds who are incapable of standing up for themselves or others can undergo a major attitude shift if the safety of a pretty girl is on the line. Also this is not necessarily a good thing.

The next tale concerns Yeo-wool (played by Park Ki-woong) who lives in the aftermath of a zombie apocalypse working as an overseer for a labor team of tame zombies. The social class narrative of zombie is pretty pronounced here. Yeo-wool makes his living off of zombies and yet is completely repulsed by them, playing zombie killing video games in his spare time.

Then it turns into a love story and this portion of the film just gets really weird. Don't get me wrong- it's an interesting enough idea and resolution. The risk of love here works very well as a metaphor for the risk of destroying civilization as we know it. And there's plenty of weirdly compelling comedy bits here, too, like the whole deal with the fingers. The two ideas just don't really go together.

The final segment is about Soo-min (played by Kim Su-an), a little girl who's frustrated by her autistic younger brother, who's even more annoying than a regular younger brother. This is a pretty typical story about siblings overcoming differences and just making an effort to love without the expectation of reciprocation. And then surprise! Reciprocation comes along anyway. It's predictable, but cute enough that I didn't care too much. I'm still not sure what was going on with that fantastic bit at the end though. I guess it's something from the comic?

Really, if there's any succinct way to describe the whole of "MAD SAD BAD", it's that I'm not really sure what was going on with the final product. Usually omnibus films have some sort of linking theme to justify showing several short films at once. There is not any such theme here that I can find. They're all about love, kind of, except they're all different kinds of love that can't really be compared. Manipulation maybe? All three films involve characters who are being manipulated, but only two of them are protagonists.

Even the title "MAD SAD BAD" is a bit of a mystery. I guess it works in vague terms. The central emotional moment of each segment can be described in terms of those emotions. The Korean title doesn't use rhyming though- it's just each story summed up in a single word. That's probably the best way to really appreciate "MAD SAD BAD"- it's a set of forty minute films that just are. Decent enough to watch I suppose, but not great, and you shouldn't feel compelled to see all three in the same sitting.