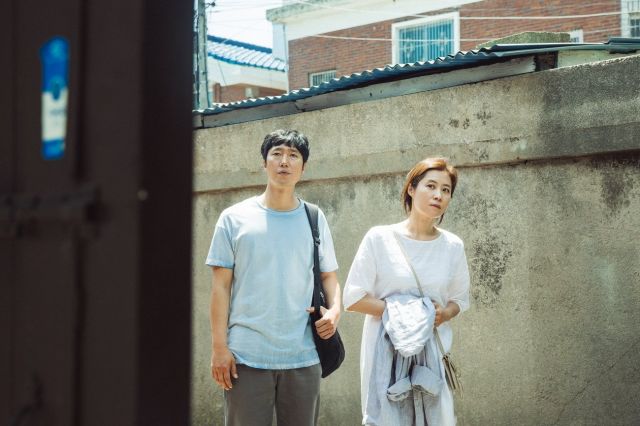 Gunsan is a sad, lonely town on South Korea's western coast that is very pretty to look at but communicates almost nothing of substance. That dispiriting appraisal is also accurate when it comes to the named characters of "Ode to the Goose" as we consider leading man Yoon-yeong (played by Park Hae-il), who spends so much time thinking about what to say he barely ends up talking at all. Then Song-hyeon (played by Moon So-ri) talks just to fill the silence but avoids talking about what she actually wants. Their faux day trip date to Gunsan, consequently, goes about as well as might be expected.

"Ode to the Goose" is a very firmly anti-romantic movie in this respect. All the right elements are there for some sort of romance to pop up somewhere, but because writer/director Zhang Lu treats the neuroses of the characters as actual serious mental problems rather than wacky charming cuteness, progress is limited. The characters try to talk themselves into thinking that they're a single magical personal connection away from turning over a new leaf.

Much like in real life, these pep talks don't work. Even foreign exoticness proves of limited usefulness. A backstory with origins in China or Japan would seem to be a predictor of tantalizing romantic mystery, yet the characters have such straightforward personalities this extra information never serves to really expand on who these people are, or why they do what they do. Brief humorous setpieces about nativist protestors and perpetually unsatisfied older citizens only highlight this misplaced emphasis further.

There's quite a lot of humor in here, all of the awkward and weird variety as characters, most usually Yoon-yeong, awkwardly laughs at strange social situations. This even expands beyond romantic meet cute set-ups. You know that scene in horror movies, where we realize that there are cameras everywhere, and some malevolent presence is watching from the other side? That scene is in here, and it's creepy, but mostly it's just knowingly pathetic in a way that doesn't inspire pity or even self-pity.

Truthfully the main justification for character actions are just the predictable kind. The way Song-hyeon strings male characters along makes a lot more sense once we realize that she's only pretending to be coy. This is exposited, rather counter-intuitively, in flashbacks during the latter part of the film that predate the Gunsan date. It's hard not to laugh at how Yoon-yeong can only be provoked into action by horribly unsubtle, aggressive, and obviously ill-advised flirting. Then the minute that's gone, he's right back to being uselessly taciturn.

Well, maybe not that useless. "Ode to the Goose" is a story about how talking to people is actually really hard. I'm choosing to interpret the English language title as a metaphor explaining how for some people just running off to another country is just as sane and natural a course of action as a goose's regular migration pattern. If you're a stranger living in a strange land, no one expects you to be normal. Tempting isn't it?

"Ode to the Goose" is directed by Zhang Lu, and features Park Hae-il, Moon So-ri, Jung Jin-young and Park So-dam.

"[HanCinema's Film Review] "Ode to the Goose""
by HanCinema is licensed under a Creative Commons Attribution-Share Alike 3.0 Unported License.