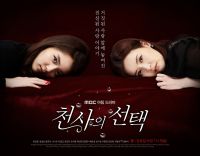 120 episodes - Mon~Fri 07:50
Synopsis
Whether its done consciously or subconsciously, we all inflict hurt on others as well as become subjected to such infliction ourselves. No one is always a victim hence no one is always a perpetrator. In our lives, todays perpetrator can become tomorrows victim. We attempt to gaze into the sin and forgiveness, love and desire of human hearts through two women with deep wounds of their own and through families around them. At the end, the pain and the wound no matter how deep they are can only be healed with true love.

Choe Eun-seol (actress : Choi Jeong-yoon)
Dream Cosmetics research laboratory chief and Park Sang-hos wife. She is meticulous and sharp at work. However, outside work, shes laid-back and clumsy. Shes bright and cheerful always willing to lend helping hands to others as well as trusting and optimistic. She married Park Sang-ho who was her coworker at her fathers company. She lost her younger brother Eun-hyuk when she was young and she blames herself for his death. Her guilt draws her closer to her other brother Eun-seok and she has very strong affection towards him. Once unbelievable misfortune hits Eun-seok, shes engulfed into the turmoil of misery.

Park Sang-ho (Actor : Yoon Hee-seok)
Eun-seols husband, Min-jaes friend and director of Dream Cosmetics. Hes a sweet, loving husband who loves to surprise his wife with romantic gestures. But everything is a carefully staged charade and underneath his mask, he is a man of cold charisma and selfish ambition seeking for vengeance of his father. He got close to Eun-seol and succeeded in marrying her with an ulterior motive of having his revenge and he was pursuing his ultimate goal when something completely unexpected happens before his brother-in-law Eun-seoks wedding.

Wang Min-jae (actor : Jeong Seong-woon)
Director general of Angel Home Shopping. Hes neat, quiet and upright in his conduct. He lost his younger sister and was sent to the orphanage when he was a child. But fortunately he was adopted by Chairman Wang and was raised with much love. His adoptive father may be rich but he believes that the only money earned with his own effort and sweat belongs to him. He meets Eun-seol while they were doing volunteer work and falls in love with her. His love for her is pure and true and he quietly stands by her like her guardian angel.

Kang Yu-ran (actress : Ko Na-eun)
Eun-seols junior in school and Eun-seoks wife. She has an angelic beauty and she talks and moves with grace of a noble lady. However, she is a two-faced woman hiding her twisted desire behind her innocent looks. She meets Eun-seol while she was working in a café in Guam on a working-holiday visa. Through Eun-seol, she meets Eun-seok who was traveling with his sister and Yu-rans ambition to climb up the social ladder sparks up. She fabricates series of lies about herself to marry Eun-seok. After much ordeal, she succeeds in marrying him but...

View all 45 pictures for "An Angel's Choice"