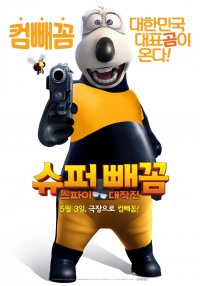 Bernard works as a janitor at the National Agency but he dreams of becoming the 'greatest spy'.
One day, unknown villains appear and threaten the earth with ice bombs.
However, Bernard is the only one who can enter Polar Star, the base of the bad guys!
Bernard is input with 'Super Brain Chip' and gets training to prepare him for this unexpected mission. His potential power slowly show itself. Will Bernard be able to defeat the villain leader White and save his earth friends?