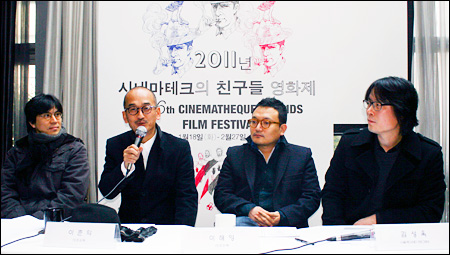 Ever wondered what kind of works inspire famous filmmakers?

Fans will have a chance to find out through the Cinematheque Friends Film Festival, featuring 44 domestic and foreign works including those that were handpicked by directors who have paved new possibilities in Korean cinema. The 6th edition of the annual event kicks off on Jan. 18 at Seoul Art Cinema, Jongno, and will continue through Feb. 27.

Period specialist Lee Joon-ik ("The King and the Clown") revealed that he was inspired by "Monty Python and the Holy Grail" (1975, United Kingdom) for "Hwangsanbul".

Bong Joon-ho, known for homicide stories such as "Memories of Murder" and "Mother - 2009", recommends Japanese master director Shohei Imamura's "Murderous Instincts" (1964). "I recently saw Imamura's early works on DVD and I was particularly struck by 'Murderous Instincts'," he said.

Ryoo Seung-wan wishes to share an Italian piece that reminds him of Imamura. The director, who recently achieved both critical acclaim and box office success with "The Unjust", chose "Kidnapped" (1974, Italy) by Mario and Lamberto Bava, of which he says "The film suddenly unravels without preamble or pause, reminding me of how I felt when I saw Shohei Imamura's 'Vengeance Is Mine'."

The lineup includes not only classic masterworks but also timeless B-movies such as "Evil Dead". Lee Hae-yeong ("Like A Virgin") became all the more motivated to make exciting horror flicks after re-watching the film.

Lee Myung-se ("Nowhere To Hide") professes that Sam Peckinpah had a place in his heart when everyone else was obsessed with French nouvelle vague auteurs, and recommends "The Getaway" (1972) by the American director.

The film festival also features French classics such as "The Tree, the Mayor and the Mediatheque" by Eric Rohmer - chosen by film critic Jung Sung-il, who recently debuted as a filmmaker with the experimental feature film "Cafe Noir".

This year's festival is titled "Jouissance Cinema" - to share the "joy" of the medium in commemoration of the late Rohmer - "Four Adventures of Reinette and Mirabelle" (1987) by the French nouvelle vague master will be screened during the opening ceremony.

Seoul's only non-profit cinematheque (film archive with small theaters that focus mostly on art-house and classic works), Seoul Art Cinema is located on the fourth floor of Nakwon Arcade near Jongno 3-ga Station on subway lines 1, 3 and 5. Each year it screens some 500 films through thematic programs and film festivals, catering to about 50,000 visitors. Visit www.cinematheque.seoul.kr for more information.