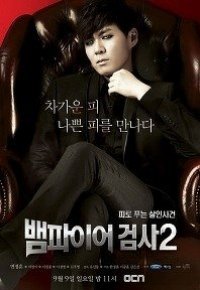 11 episodes - Sun 23:00
Synopsis
The highly anticipated sequel to "Vampire Prosecutor", Yeon Jeong-hoon reprises his role as Min Tae Yeon, the long arm (or fang) of the law. Its been seven years since the young prosecutor was rendered into a creature of the night, but Tae Yeon, undead as ever, is fresh and lively as a prodigious prosecutor. His secret? A supernatural ability to sense the last memories of victimsby tasting their blood. Together with Detective Hwang Soon Bum and Prosecutor Yoo Jung In, he heads the unit of unsolvable murder investigations and butts heads with the new chief prosecutor Joo Hyun Ah, who might become more foe than friend. But thats the least of his problems, especially since hes still got an ongoing, personal case of his own: who turned him all those years ago, and what has happened to his now-vampiric sister?

View all 14 pictures for "Vampire Prosecutor 2"