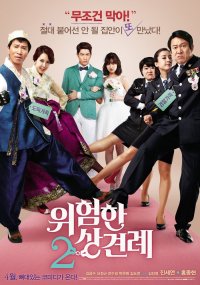 Formerly known as "Police Family" (경찰가족, gyeong-chal-ga-jok) and "Clash of the Families 2" on HanCinema
Synopsis
"How dare you...my daughter! It's unthinkable! If you become the Korean police then I'll think about it."

A detective father is about to retire. With the eldest of the family being a leader of scientific investigation, a brother-in-law who teaches at Police School, a second sister who is a detective, a younger sibling whose whole family is made up of policemen or women. Yeong-hee is a former national fencing athlete and current detectve in the narcotics department. She's been supporting her boyfriend for 7 years in a row to help him get through police test.

"...emotions of a criminal but is getting ready to take the police test 7 years in a row."

I will not allow my daughter to marry the son of a wanted man! vs. I am going to make my son a cop!

View all 79 pictures for "Enemies In-Law"