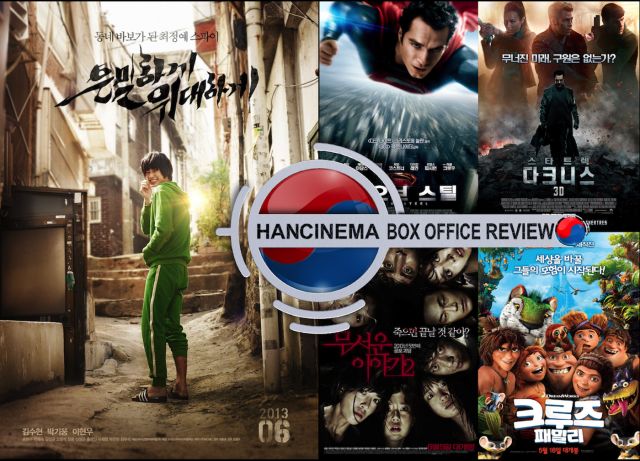 Jang Cheol-soo's second directorial effort "Secretly and Greatly" managed to just outplay "The Man of Steel" for another impressive weekend at the top. The action comedy added a little over a million admissions to bring its total count to 5.2M. That makes it the third highest grossing Korean film of the year behind "The Berlin File" (7.1M) and "Miracle in Cell No. 7" (12.8M). Starring Kim Soo-hyun as the sleeper cell agent Ryoo-hwan, "Secretly and Greatly" tells the tale of three North Korean spies adapting to South Korean life, but things get a little interesting when word comes down that they are to committed suicide. Jang Cheol-soo was the man behind the 2009 psychological thriller "Bedevilled" and has worked on a number of Kim Ki-duk's films since 2002. "Secretly and Greatly" marks an interesting turn of genre for this exciting Korean director and has been attracting a lot of attention in Korea since its release earlier in the month.

It was a close race at the top, one that almost placed "Man of Steel" at the top. Zack Snyder is the man behind this latest Superman flick, and the DC franchise pulled in a little over 1M admissions over 998 screens around the country over the weekend. Although "Secretly and Greatly" held the most admissions, it was actually "Man of Steel" that came out on tops if strictly considering their total gross. Ticket sales are one thing, but special screenings (3D or otherwise) place DC's hero at the top of the cash pile. "Star Trek Into Darkness" fell one place with 97,185 stubs to its name. The film held second last week with 284,114, but has been heavily over-shadowed and its ticket count forced into a slow grind. "Star Trek" now moved onto 1.4M admissions since its release late last month. At number four is the Korean omnibus feature "Horror Stories 2" which contains four short stories from different directors. Like "Man of Steel" it too fell one place and saw its admissions count slashed to a soft 62,485. The previous film, "Horror Stories", claimed just 329,800 last year, a benchmark that has already been passed as its 'sequel' now closes in on 500,000 admissions.

The animations film "The Croods" is in its sixth week at number five and during this past weekend it added 44,976 to bring its total admissions up to 870,163. Also slowing its role was the sixth film in the popular "Fast and Furious" series. "The Fast and the Furious 6" entered into the chart at number one in May, opening with a hearty 625,056 to take the crown from "Iron Man 3". This, its forth week, saw the hard-hitting action flick advance to 1.7M total admissions. The American action-thriller "Olympus Has Fallen" followed in seventh with just 11, 290, slipping just the one place from last weekend. The film was made on $70M, and has since made almost double the in ticket sales internationally.

Richard Linklater's "Before Midnight" returns to the top ten after having been eject from the list last week. The film is a sequel to the 1995 film "Before Sunrise" and to "Before Sunset" (2004). This romantic drama claimed just 9,014 admissions which shifted its total ticket count up to 163,436. Close behind it was "The Great Gatsby" with 8,126 of its own. The film has amassed 1.4M admissions in Korea, a relatively small following considering the film has grossed more the $300M internationally. Lastly, the Korean box office would not be complete without a Japanese animation, and this week it was "Nazuma Eleven Go vs. Little Battlers Experience W: The Movie" which rounded out the weekend's top films. The film held the same position last weekend, except this time it did so with a third of the support.